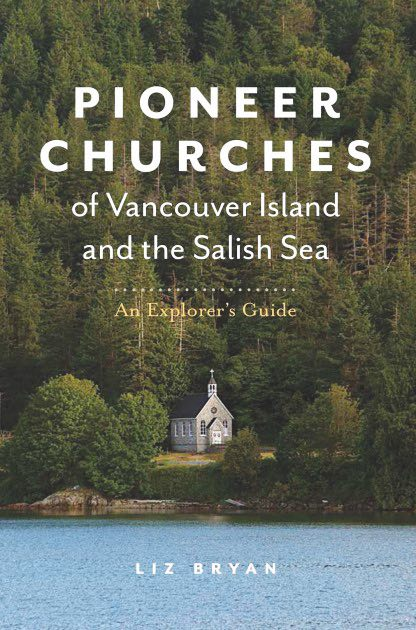 Ever since February 2017, when I became office administrator for the congregation at St. Stephen in Saanichton, I have been aware of the unique impact that our heritage building has had in the Mount Newton Valley. But until I started reading this tome, I didn’t realize just how unusual it is within the province.

Divided into five geographical sections, Pioneer Churches is more than just a pretty picture book. In this work (which took several years to compile) photographer and author Liz Bryan provides an insight into the planting and growth of Christian worship across the Island.

Starting with Christ Church Cathedral, on through to Christ Church in Alert Bay, Bryan relates stories about the people and the early structures they erected for worship services. Some churches, such as Church of Our Lord in Victoria, sprang up due to clergy disagreements, while others, such as the Butter Church near Duncan, fell into disuse. St. Mary was built when some members no longer wanted to walk across the Mount Newton Valley for worship. The thinking was that since the railway had made Saanichton a vibrant hub, it deserved its own church space.

This book is meant to serve as a tour guide, so driving (or walking) directions with addresses and contact information are provided for almost all the buildings. Indeed, this is a solid resource for anyone interested in church history or West Coast architecture. It is also handy if you just want an excuse to explore (post-COVID-19) some interesting portions of the island. And you might just come to appreciate a unique bell-cot or two.

With many of the buildings profiled having sprung from the Anglican tradition, the members of the diocese should be rightly proud that we have been given the gift of stewardship of a vital part of Christian history and witness on the Island. While some of the structures profiled in this book no longer host regular worship, and other congregations are into their second or third iteration, the St. Stephen building is still in active service on the same site it has occupied since 1862, the oldest place of worship on its original site in continuous use in the province.

Bob Quicke is a member of the Parish of Central Saanich, sings with the choir of St. Mary (pre-COVID-19) under the direction of his wife, Cathy.

Of particular interest in Liz Bryan’s book, Pioneer Churches of Vancouver Island and the Salish Sea: An Explorer’s Guide, is the work of B.C.’s first Anglican bishop, George Hills, who played a key role in the development of several Anglican churches on Vancouver Island. Roberta Bagshaw’s No Better Land, listed in the suggested reading section of Bryan’s work, was published 25 years ago, but is not out of date; after all, the diary has not changed! This book includes a detailed description of Hills’s ministry on Vancouver Island and what we now call the Lower Mainland, as well as the diary of Hills’s first year in B.C.

George Hills was ordained in Westminster Abbey in 1859 and then set sail for Vancouver Island, travelling across the Atlantic to the Isthmus of Panama, then likely by train to the Pacific (no canal until the early 20th century), arriving in Victoria by boat on the feast of the Epiphany, January 6, 1860, a journey of 8750 miles lasting 50 days. Imagine his courage and commitment!

The work Hills accomplished in his first year on Vancouver Island and the mainland is remarkable, given the conditions he faced. Bagshaw’s introduction to the diary lays out the circumstances Hills faced on his arrival, including a gold rush in full swing and small numbers of clergy, churches and schools.

Although he travelled widely and conducted services in many locations, not always churches, many of the references to church services refer to Christ Church, later to become the cathedral. He conducted his first service there just two days after his 50-day voyage. During Holy Week in 1860, services were held daily, culminating on Easter Day when Christ Church was full with “sixty communicants, the largest number known.”

Hills travelled by boat, horse, canoe or on foot and sometimes camped out. Not all indoor accommodations were the best. Here is his entry for June 25: “My bed consisted of blankets laid upon a mattress on the floor. Within arms’ length was a box filled with a cat and kittens, so I was safe from rats coming to my face.”

B.C.’s first bishop served for 32 years, resigning in 1892 at the age of 76 to return to England, where he died three years later. B.C.’s 14th bishop, Anna Greenwood-Lee, has taken office 161 years after Hills’s arrival, at a much different time in the history of our church and diocese. It will be interesting to see how she will deal with a different set of challenges and what lasting impact she will have. Perhaps she will feel the same encouragement expressed by Hills in his August 8, 1860 diary entry: “The promise of the apostle: ‘Be ye steadfast, unmoveable, always abounding in the work of the Lord, forasmuch as ye know that your labour is not in vain in the Lord.’”

Gary Davies is chair of the communications committee for the parish council at St. Andrew in Sidney.