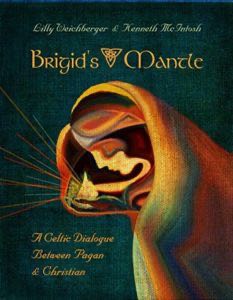 Saint Brigid of Kildare (c. 451-525) will be honoured with an annual public holiday, starting Feb. 1, 2023, in the Republic of Ireland. There, she is considered one of three national saints, along with Patrick and Columba.

Despite Brigid’s influence in many places and times, she’s often been left out of church calendars of saints. Presumably it’s her historicity that’s in question, but as to that, many argue the same about Jesus. There’s much about Brigid the Christian saint that resembles the pre-Christian Celtic goddess Brigid, so the two are often seen as merged — the former, a Christianized version of the latter. It’s a delightful confluence to some of us, while it scares those who still see paganism as the opposite of the sacred.

Brigid has three aspects that are described in various ways, including poet/priestess, blacksmith/arts and guardian of hearth and home. She is ageless and is seen as maiden, mother and crone. She is often depicted holding a bowl of fire, which alludes to the forge and her smithing skills. It’s also a metaphor for transformation — in the “fires” of our lives, through trials and tribulations, we may feel hammered out of shape by life’s great challenges, but in time we often discover that we’ve been forged into new, stronger versions of our older selves.

In Brigid’s Mantle, Brigid is portrayed as a bridge between pre-Christian Celtic spirituality and Celtic Christianity of the earliest centuries after Christ. As the subtitle says, this is a dialogue between pagan (Lilly) and Christian (Kenneth). Kenneth McIntosh is an educator, pastor and prolific writer, one of his most popular titles being Water from An Ancient Well: Celtic Spirituality for Modern Life (2011). He might be a better place to start for those uncomfortable with the “pagan” label. (The term “pagan” simply means someone connected to the land or to the earth.)

The book is divided into six chapters: 1. Celtic Christianity: An Overview; 2. Meeting Brigid; 3. Brigid and the Invisible World; 4. Brigid and the World of Nature; 5. Brigid and Human Relationships; and 6. Brigid’s Mantle: Connecting the Past and the Present. Within each chapter, there are several “Kenneth” and “Lilly” sections, as the two authors dialogue to see the similarities and differences between the Christian and pagan perspectives.

For Kenneth, Celtic spirituality is “an ancient form of Christianity . . . that focuses on justice, tolerance, equality for women, creativity, and a love of Nature.” Meanwhile, Lilly celebrates the pre-Christian version of Celtic spirituality, especially connecting with the goddess Brigid. These two branches of Celtic spirituality have common ground but are also distinct. The first chapter provides an overview of Celtic history and indigenous Celtic traditions, as well as an overview of the persecution by early Christians of anything they saw as “pagan” — including three centuries in which up to 100,000 women, men and children were killed as pagan witches.

Among the fascinating stories or legends told by both Kenneth and Lilly in this book, is that of Brigid as a midwife and wetnurse at the birth of Jesus. This legend features Brigid somehow transformed into a servant in the Bethlehem inn, who leads Mary and Joseph to the stable and then stays to help young Mary give birth. Afterwards, teenage Mary falls into an exhausted sleep, and Brigid nurses the baby with her own breast milk. Because of this legend, Brigid is also called Mary of the Gaels or Mary of the Celts.

Kenneth explains that Christians through the ages have sought out sacred feminine images, such as Mary, Brigid or the Virgin of Guadalupe, because our traditions have repressed the divine feminine. For example, English Bibles translate the Hebrew El Shaddai as God Almighty, “but a literal rendering would be ‘The Many-Breasted One.’” And, the Hebrew word for the spirit of God is the feminine Ruach. Jesus also identifies with feminine images, longing to be like a mother hen, for example, gathering and protecting her chicks under her wings.

In one of Lilly’s stories, she goes on a shamanic journey in which she envisions meeting Goddess Brigid in a forest clearing, wearing a sword that Brigid gave her. Leaving her sorrows behind, Lilly is invited by Brigid into a new cycle of joyful abundance, but first she must use the sword to cut away the illusions of the past — the situations or relationships that have ended. “The more you hold on to these illusions,” Brigid says, “the more you will be cut by them.”

This wonderful book shows us an example of the gentle way in which Celtic Christianity grew naturally from older Celtic indigenous ways — without either side condemning, torturing, burning or killing the other. Goddess Brigid and Saint Brigid spread their mantle of loving and healing inclusion forward through the centuries, offering the divine feminine to nurture our divided world.

This review is the second in a series of reviews of books about Celtic Christianity. Read last month’s review of Persistent Resistance: Calls for Justice from the Celtic Traditions: Celtic spirituality and the great injustices of our times.