What the church has to offer a world in spiritual crisis

Book Review: Why Gather? The Hope and Promise of the Church by Martha Tatarnic. New York, NY, Church Publishing, 2022. 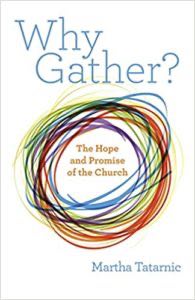 Why Gather? is both the title and the central question at the heart of Martha Tatarnic’s latest book. Tatarnic is the incumbent at St George, St Catharines in the Anglican Diocese of Niagara and she has previously published on what the Christian tradition has to say about food and the way we eat. In her latest book, Tatarnic explores why gathering as part of a church and congregation still matters, particularly in the context of a church in decline.

The book is heavily informed by the COVID-19 pandemic and indeed it opens in the early days of March 2020. Tatarnic is days away from a planned and much longed-for trip to Jerusalem but is forced to cancel because of COVID-19. Up until that point, Tatarnic had been convinced, as so many of us were back then, that this whole thing would blow over. Even as schools and business began to shutter, Tatarnic and others in her church talked of being able to gather again in a matter of weeks or months. But, as we know, that was not what happened. Instead, the pandemic upended all our lives in ways and for a length of time few, except perhaps some hand-wringing epidemiologists, could have predicted.

Tatarnic describes the pandemic as a wilderness period, both for herself as a priest and for the church, but she points out that “[w]hat looks like the wild and wandering circumstances that never would have been our choosing is actually terrain that is ripe for finding out who we really are.” Tatarnic admits that she had been feeling burnout for a long time before COVID-19 but in being forced to stay put and not get on a plane to Jerusalem, Tatarnic found herself at a bargaining table with God and that she was “putting stuff on that table that hadn’t felt up for grabs for a long time.” Among that “stuff” was her calling as a priest.

At the same time, a church that had been in decline for decades and had been wrestling with some big topics, such as Indigenous reconciliation and self-determination and marriage equality, found itself forced to shutter its doors. And yet, at the same time, churches were deemed “essential” — a label that allowed many to continue offering worship with a skeleton crew through livestreaming services. The pandemic and the designation of churches as “essential,” Tatarnic argues, have promoted many in the church to ask questions that should have been asked before: “Why gather in Jesus’ name at all? Why does the church even matter…?”

While many churches may be able to offer ready answers to these questions in the form of their outreach activities, Tatarnic believes that the decision by the bishops of Ontario to suspend the Eucharist exemplifies the “story of how what we do only matters for ourselves.” And yet, argues Tatarnic, many of the issues that outreach tries to tackle and that the church has been grappling with, and indeed the big crises that we as humanity face, are, in fact, the result of a spiritual crisis or “a disconnection from key spiritual truths.” Tatarnic asks:

If we believe… that God really is concerned with the health and healing of the whole Earth, not merely the survival of the institutional church, what is the church doing if it isn’t on board with proclaiming the message of God’s saving help for us all?

As for Tatarnic and her own pandemic reckoning, in the end, she admits, there was no lightning bolt, nor even a quiet voice from God. Instead, Tatarnic quotes the words of Peter when Jesus asks the Twelve Disciples if they will abandon him: “Where else will we go? You have the words of eternal life.” She describes Peter’s response and her own realization that there are no “escape hatches” as a sigh. It also, Tatarnic argues, points to the fact that “we’re infected with one another.”

What the pandemic showed us, is that even with all the measures taken, all the handwashing and mask wearing and staying at home, we only ever managed to slow the virus’s spread, not stop it. Where else can we go if we are always and everywhere breathing the same air as others around us?

What this “infection” points to, Tatarnic believes, is an important truth about why the church matters. We are inextricably connected, which means that we also need one another: “We need one another to know and love Jesus. We need the community of faith and the stories of how God has been at work in actual, real lives… in order to love and serve God.”

In the book, Tatarnic goes on to examine what she calls “the ultrareal of the church.” “Ultrareal” is a term Tatarnic first came to in the context of running. It is a mindset in which the runner sees and embraces the reality of the situation they are in. Tatarnic gives as an example the weather. While we may grumble about the rain, we can also acknowledge that it is cooling and refreshing. Importantly, this isn’t about adopting a positive mindset, it is about seeing what is really there, it is about fact.

In the third part of the book, Tatarnic looks at how God is revealed through communities of faith. She says that while ultrarealism helps us to see and accept who we are, the next step is to see the grace of God in the “mess and fragility and heartbreak, not in spite of it.” Tatarnic recounts stories of how God’s grace is revealed through death, through suffering, through the worst experiences of our lives, in the moments when everything seems to be falling apart. In those moments, she writes, “God doesn’t leave us helpless… Gods sets us up so that we live our faith in community, we seek God together.”

In the fourth and final section of the book, Tatarnic addresses the question of whether ultrarealism might mean that the church isn’t going to change:

To say that the church needs to get real about who we are instead of always focusing on who we wish we could be is not to say that we aren’t also on a path of how we seek to be better, how we hold ourselves to account, how we look for and call out where change is needed.

Indeed, Tatarnic believes that becoming an inclusive church will necessitate allowing ourselves to be changed. She gives the example of churches trying to attract young families, in order to secure the future of their church. What inevitably happens, says Tatarnic, is that when parishioners find themselves worshipping to the sound of crying babies and shouting toddlers, they realise that while they might want young families to join in principle, they are not necessarily prepared for the ways in which those families will change the life of the church.

Why Gather? isn’t about giving the church permission to give up — “I want us to fight for a better future” — but it is a rallying cry to see and embrace the truth of what is in front of us and to embrace what the church has to offer a world and a society in spiritual crisis. The book is packed with engaging human stories, including Tatarnic’s own story of her personal struggles with the central question of the book. Tatarnic also writes in clear and concise prose that is sure to appeal not just to Anglicans but to anyone interested in the question of whether and why the church still matters.